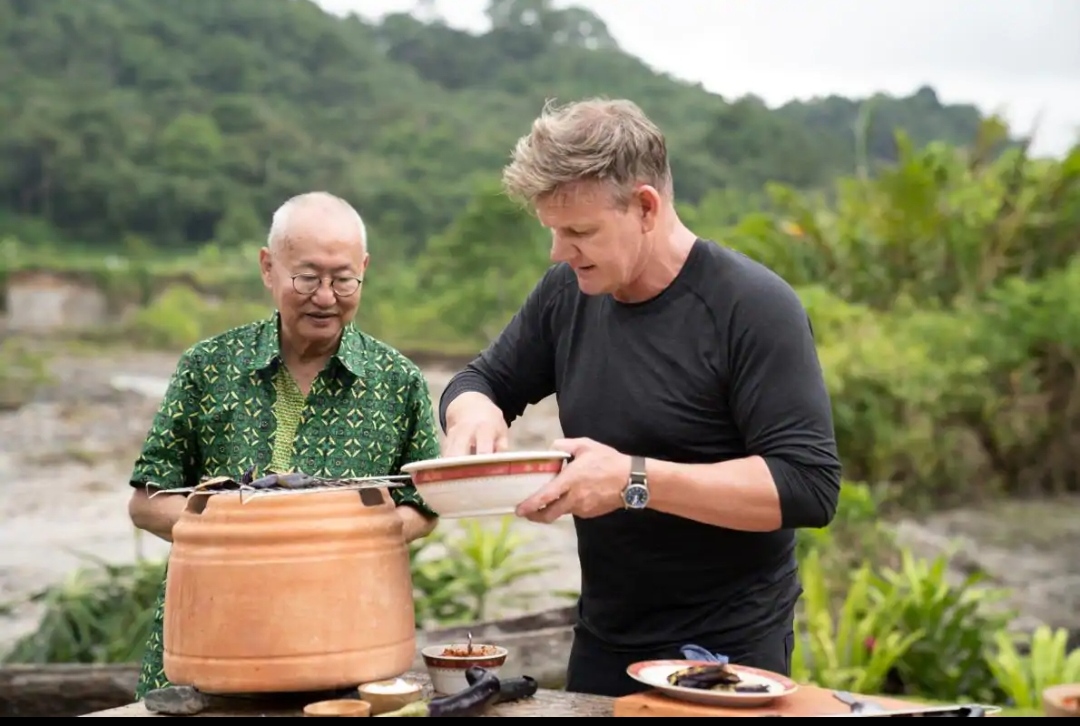 The swell of the ocean just off the coast of the West Sumatran city of Padang makes Gordon Ramsay’s job difficult. Navigating the narrow outriggers of a fishing boat to set nets while keeping his balance is a much slower process for him than for the fishermen of the region. “My feet don’t even fit on the plank,” he says. “I didn’t realize I’d be auditioning for Cirque du Soleil.” But the fishermen are relying on him to secure the fishing nets that will stay down for three to four days, and Ramsay is feeling the pressure. After a valiant attempt to stay upright while the waves toss the boat, he loses his balance and falls into the Indian Ocean.

Fishing is important in the Indonesian archipelago, which is made up of more than 17,000 islands, the second-largest of which is Sumatra. Rugged West Sumatra, where rainforest clings to the steepest slopes of volcanoes and waterfalls cascade into deep ravines, remains a wild and uncharted realm. It’s also the home of masakan padang, the most popular and influential style of Indonesian cuisine. In a place where many people don’t have refrigeration, food here is traditionally rich with plenty of chili peppers and spices that preserve the meat. It’s in West Sumatra where rendang—a meat dish famous for its spiciness, long cooking procedure, and ability to last for days—originated among the Minangkabau people.

A local woman shares her kitchen and stove with Gordon Ramsay and Katuju so Gordon can make his rendang.PHOTO BY NATIONAL GEOGRAPHIC/ED WRAY

Over his half-century career, Chef William Wongso has been a mentor to many of the country’s best chefs, and is considered the godfather of Indonesian food, a mirror of the region’s rich biodiversity and culture. This famed restaurateur, author, and TV chef began his career by watching sidewalk food vendors, and has become a legend as both a teacher and taskmaster.

His taskmaster skills come in handy with Ramsay, who Wongso has challenged to master beef rendang by the end of the week. If that isn’t enough pressure, the judge of both chefs’ rendang dishes will be the governor of West Sumatra. But Ramsay will need to prepare more than just a delicious rendang for the banquet.

Left: Gordon Ramsay gets a lesson in making rendang paste on a cobek and ulekan, or Sumatran pestle and mortar.
Right: A wet and muddy Gordon Ramsay takes a breather after participating in a bull… Read More

Influenced by spice traders and travelers, Indonesian cuisine is extremely diverse. In West Sumatra, bika is a popular teatime snack made with coconut that’s cooked in clay pots over cinnamon wood. Odoriferous durian, considered by many the “king of fruits,” is polarizing to some but extremely popular in Indonesia. The spiky fruit’s creamy flesh has a custardy taste, but it’s the pungent sweet-garlic-and-gas scent that’s caused it to be banned on public transit throughout Southeast Asia. Seafood, such as ocean-caught fish and cave prawns, are also a highlight of West Sumatran cuisine, and Ramsay must choose a variety for his banquet.

“Talk about being pushed to your limits,” says Ramsay. “I may not be able to perfect a rendang in seven days, but honestly, I’m pretty happy with what I did. He has such a wealth of experience, and one that can only make me a much better chef.”